Here's your complete KICKR ROLLR In-Depth Review, with full-ride testing - as well as deep-dive into how the KICKR ROLLR works, and who it is (and isn't) for! Trainer & Chill Merch: 🤍dc-rainmaker.creator-spring.com Wahoo has now formally announced their KICKR ROLLR smart trainer…err…smart roller. I’m not super sure how you classify it (Wahoo themselves officially calls it a “smart trainer” in their media release), but whatever it is – it’s here and now properly announced. That’s following it being non-announced last fall at UCI’s Road World Championships, where riders used them in the warm-up tents over the course of numerous days, in the time-trial areas. The KICKR ROLLR however is a bit different than either other smart rollers we’ve seen on the market, or Wahoo’s own smart trainers. The front-end has a stability frame that holds the bike in place, while the rear is able to move around freely. However, unlike all of Wahoo’s existing smart trainers, the KICKR ROLLR requires your bike have a power meter for use with most apps. That’s because no roller company to date has mastered getting even vaguely accurate power on a roller (due to lack of constant pressure on the wheel), and in this case, Wahoo decided against offering power altogether. Instead, it links up to your bike’s existing power meter, and then broadcasts all that together to 3rd party apps. The primary appeal of ROLLR being that it takes no more than 3-5 seconds to put your bike on it. But more on that later on. Full Written review: 🤍🤍dcrainmaker.com/2022/02/wahoo-kickr-rollr-smart-trainer-in-depth-review.html 0:00 Quick Intro & Specifications 1:17 Power Meter Catch 2:04 Bike Size Requirements 2:17 The Unboxing & Setup 5:08 Road Feel & Realism (Zwift) 7:02 ERG Mode Tests (TrainerRoad) 9:04 Sound & Volume Tests 10:42 Wahoo Direct Connect Integration 11:17 Wrap-Up & Recommendations - The Site ► 🤍🤍dcrainmaker.com Main Camera ► 🤍amzn.to/2EWbhMA Action Cam ► 🤍amzn.to/3zs3QZ2 The Drone ► 🤍amzn.to/3yPawQw All Camera Gear ► 🤍dcra.in/DCRCamera Instagram ► 🤍instagram.com/dcrainmaker Facebook ► 🤍facebook.com/dcrainmaker Twitter ► 🤍twitter.com/dcrainmakerblog Strava ► 🤍🤍strava.com/athletes/dcrainmaker Most Music ► 🤍player.epidemicsound.com/#/ #WahooROLLR #KICKRROLLR #ROLLR 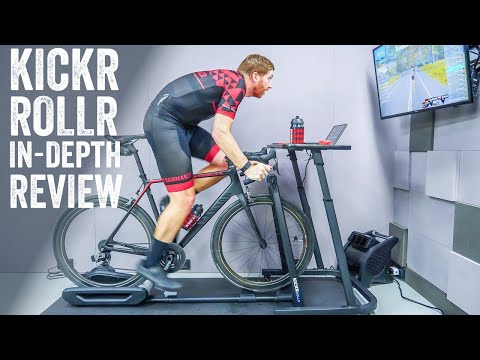 if you have cadence sensor and speed sensor by garmin on your bike already paired to rouvy and zwift, why do you say you need a power metre or it wont work? wont work accurately for power ? but should still work the same as it has for past 2 years as nothing on my bike changes?

No power meter? Holy shit. What were these guys thinking?

I had to "like" when the term "super-duper" was utilized.

is the bounce fixeable with high tire pressure?

I am a big fan of Wahoo but a noisy trainer ? Been there with the first Kickr. Not going there again. Ever. It’s not only annoying for your neighbors but you’ll hear it even through your headphones.

great review would this work with a garmin vector pedals as power source is it compatible?

I'm sure some people will buy this, but not many. It's going to end up on sale for $599 or less by fall.

Thank you' and, Wow' your a really good biker!🚴👍

I'm considering the ROLLR over the KICKR to avoid having to get an adapter and extra cassette for SRAM 12sp.

Love the review. Also reflect my thought when I first saw this was released. The only positive is super easy to take the bike in and out... and that's about it. With all the negative you have listed, for me another important one is it defeats the whole purpose of having a roller over a direct drive/turbo trainer since you don't need to balance anymore. For the price it is asking it gets very little to offer.

I just bought one its great

Such a stupid concept. You have have a power meter. Plus your rear wheel doesn't move side to side on the road.

Great review as always, Ray. This product suffers from component price asymmetry in the powermeter, which is its downfall. A powermeter on a flywheel probably costs Wahoo $20 or thereabouts, so taking it out of one of their systems doesn't bring down the price much. However, a powermeter on a bicycle costs a rider many hundreds of dollars. That's the asymmetry. When you take it out of the trainer, the rider expects the Rollr price to be much lower since they've had to shell out several hundred dollars to install a powermeter on their bike, but because it's a cheap part for Wahoo, the Rollr price is still high, and the rider is left shaking their head.

The Rollr should appeal to people with one bike, like me, who both train and ride on the same bike, and who, like me, HATE having to take the bike on and off the trainer several times a week. Add that I'm a mountain biker, meaning that I have to wash my bike almost every time I ride, and the process just gets worse. So, this system would appeal to me if a) my bike fit in the Rollr, and b) it had a powermeter, cos I don't have one on my mountain bike and don't have the cash to get one, either. But the Rollr doesn't have a powermeter, so it doesn't appeal to me or people like me.

In the end, the way I solved my problem was by taking my very old mountain bike from the early 2000s and putting it on the trainer permanently. Not as comfortable as my 2021 mountain bike, but I avoid the hassle of taking my bike on and off the trainer several times a week.

Also, somebody needs to wash their mountain bike. And that someone is Ray 😛

Even if Wahoo gave you the option for estimated power excluding the rolling resistance that you would lose (eg enable from their app) it would at least cover more of the market. I'm not sure how much rolling resistance is typically (5% maybe?). So I'm down on power a bit and it varies but that's still better than faffing around with a wheel on roller trainer like the kickr snap which never feels that accurate.
Still mildly crippled as you can't get cadence though. Painful for us users of the Apple TV with its limited bluetooth connections. It would be good if you could pair a cadence meter to it and have that combined like they do with the power meter.

I tuned out when it required a power meter

Any concerns about torque on the front fork/headset when sprinting or riding hard?

In the video you mentioned that about 8 inches of clearance would be needed for under furniture storage. Do you have an exact height dimension for the fly wheel, what appears to be the highest point, when the trainer is collapsed? I cannot find this measurement anywhere from Wahoo.

Am I missing something? What's the point of this thing? What does it do better than a Kickr Snap for instance? You can always hook your bike's PM to your app if you so wish. It's not an actual roller so the ride feel is not really that different from any other static wheel on trainer. So why bother? 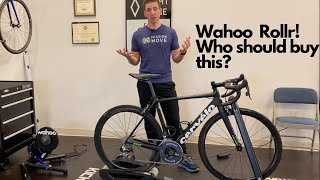 Wahoo Rollr vs Kickr vs Kickr Bike Review. Who should get the Rollr? 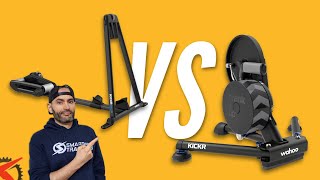 WAHOO KICKR vs WAHOO ROLLR: Which One Is Best For You? 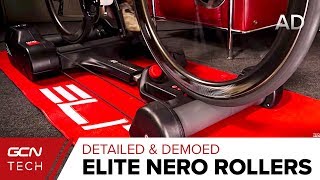 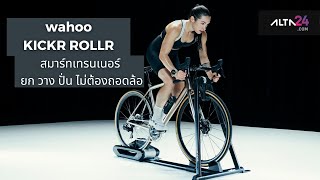 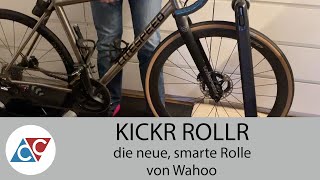 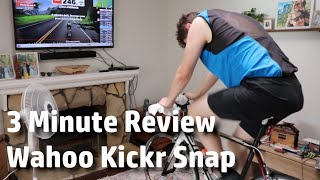 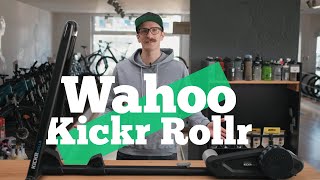 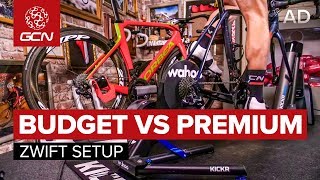 Budget Zwift Setup Vs Premium | What Is The Difference? 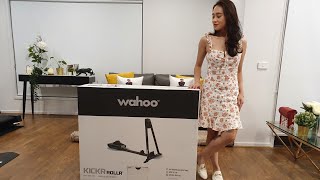 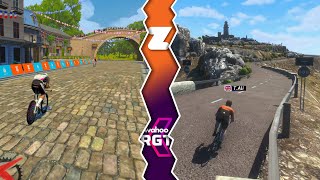 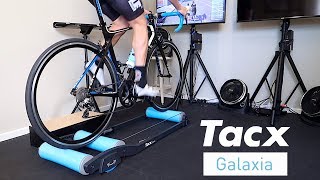 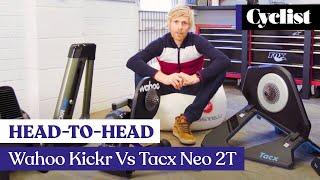 Wahoo Kickr Vs Tacx Neo 2T: Which is best? 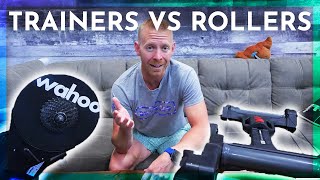 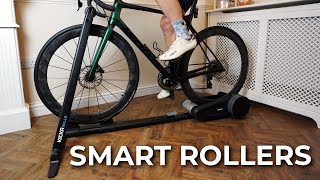 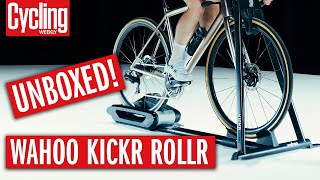 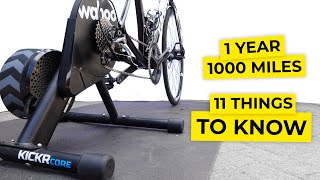 1 Year With the Wahoo Kicker Core // Watch Before You Buy!